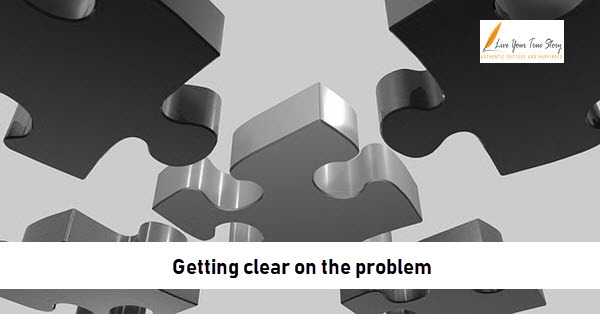 ​In today's audio, I discuss one of the most ​important but overlooked steps in solving any problem..

​You can listen to the audio by clicking on the play button below. Beneath the audio, I have provided a general transcription. There will be some small differences between the audio and the transcription.

​It's Carthage here again from Live Your True Story with another quick tip for you.

Alan is a former client of mine.

Alan came to talk to me about problems he was having in the factory which were related to communication. He was worried because the staff on the factory floor did not communicate clearly with the staff in the office.

There was just no mixing between the 2. It was as if they worked for 2 separate companies.

Alan didn't believe this to be true, but he did think he knew the actual source of the problem. He believed it was more to do with how the system recorded scrap and wastage; all those stuff that had to be thrown out because of course, not all products are perfect. So, if there was a bad product and it had to be thrown out, material was required to make that product and Alan didn't think that was being recorded properly. He didn't think there was the facility to actually record it and that's what he wanted to get clear.

So, I said then why aren't you communicating and what's more can you actually demonstrate to the purchasing manager what the problem is? So, Alan thought about it for a few minutes and he said well you know the next time it happens I could do that, So, we agreed that the next time that there was an issue on Alan's shift with the recording of materials, in particular those related to scrap and wastage, that Alan would call down the purchasing manager and go through everything with him.

And, that's what he did about a week later when the situation arose again. He was able to demonstrate to the purchasing manager how all of this material was not being captured because it was not a product that was being sold. It was waste and it was having to be discarded. The purchasing manager came to and forth all day making sure that he understood everything that was going on and what was needed and, at the end of the day he was able to come up with a solution for going forward.

It took a few weeks to implement that solution but I it got everybody on the same page. The purchasing manager now fully understood why he was not getting the information he needed and he was able to take the action over the next few weeks to have the system amended to capture every piece of material that was being used, whether it went in to a product that could be sold or, it went into a faulty product which was discarded.

But not only that. Not only did it improve the purchasing system, it improved the relationship between the office staff and the floor staff because the office staff could now see that the floor staff could be trusted; that they were knowledgeable people, they had ideas, they were able to spot the problems and of course, because they were the ones working directly in production, they were often the best people to see the problem.

And bit by bit, after that, their relationships improved and of course, Alan's role in this was recognised. So today, Alan is now the production manager. He's been promoted up to that level and he makes sure that his staff on the floor are communicating effectively with the office; that wherever he sees a breakdown he knows himself the first thing to do is get everybody who needs to be in the room together into the room together. To get them talking to each other and get on the same page so, when they understand the problem, they can identify the right action to take in order to move forward and correct the issue. But they cannot take the right action until they fully understand the problem and, they see it from both sides; from production and from the office side.

So, make sure that you speak to the right person and to make it extra effective; if you can demonstrate the problem, if you can show the problem in action, it's far more effective and it will aid understanding and that way you can work together so that everybody benefits from the situation.

So, that's my quick tip for today.

Thank you for listening and I'll talk to you again soon.

If you lack the communication skills to talk through problems and work effectively with others, check out How to Talk So Others Listen.​

It's Carthage Buckley here from Coaching Positive Performance with a quick tip for you.

So, I want to give an example that happened earlier this week. I produced an article or rather long article on the topic of Passive Aggressive Behavior one of the many topics I discuss. In the article I talked about five experts and their viewpoints on what Passive Aggressive Behavior is. They all wrote articles that are in various places on the Internet and I linked to those articles and; I gave quotes from them. That's how I was trying to add value to my readership. Then later that day, I got an email from one of my readers and his email started 'You're Great'. Now, I'm always wary when somebody starts off by telling me I'm wonderful because I don't believe it but you usually know there is something fake coming afterwards.

But what I got then was 'Really enjoyed the article. Can you please forward the five books the quotes are taken, from free of charge.' Now, first of all they weren't actually books. This person had mistakenly assumed they were books. They were articles I had linked to the articles in my own article but what really struck me was the sheer 'gall' is a word we would use here in Ireland; the nerve to ask for so much from somebody in the sense that if these were actually books, I was going to have to track him down a copy of each of the five books and forward them to him at no charge so, any expenditure of my time or my money, I was going to have to absorb that so that he could have these books. And, I was thinking that's completely unrealistic to expect somebody to do that but not just that.

Don't forget these books, if they existed, if they were actually books, belonged to somebody else. Most books are copyrighted material. I was going to have to be completely immoral and unethical and give away somebody else's copyrighted material for free to help this person. That to me is insane. There was no way I was ever going to do that to somebody else because they're like me. They're working hard trying to earn a living. They don't want everything given away for free. Some stuff they charge for or, at a minimum, if they offer a free ebook or a free webinar, maybe they want you to opt in for that so that they can keep communicating with you. They can offer you great value and if you need help further down the line maybe you'll hire them to deliver the help, You hire them to get you through a rough spot but this guy just wanted me to send him a whole lot of material for free as if everybody else should be doing his work for him.

I'm sure he didn't mean any harm but it's completely unrealistic and if you want people to help you you need to have some form of realism so a couple of questions I'd like to give you to think about when you're asking for help from somebody else:

1. Are you making it easy for them to help you?

Well, if these were actually books and I had to go to the effort of tracking them all down for him and getting a copy of each for him, before sending them on to him, whether itincurred any financial costs or not that's a lot of effort on my part and then another question:

2. Is offering this help within their remit? Can they actually offer his help?

So, if you're asking for help for somebody else, make it as easy as possible to help and make sure it's something they can do because most people, me included, are happy to help where we can but if I was to give that type of time and effort to one in person; bear in mind that I have thousands of people who read my website everyday and thousands more on an email list who communicate with me on a regular basis. If I was to give each and every one of them that level of time and effort, with no payment, how would I ever have a business? How would I ever be able to pursue my goals? How would I ever be able to do the things I need to be able to do? I do want to help other people as much as possible but I can't do it at my own expense and I would say the same for yourself. If somebody else asks for your help if it's easy to do it and you'd want to do it; go ahead and help. But you can't put their needs before your own and you can't be giving them so much of your time, your energy, your money or any other resource that you have none left to pursue your own goals. Because you are here to live your own life, not somebody else's. That's my tip for today. When asking somebody else for help, make sure your expectations are realistic.

Thank you for listening. I'll talk to you again soon.

12 Things an assertive person should be able to do. Are you assertive?