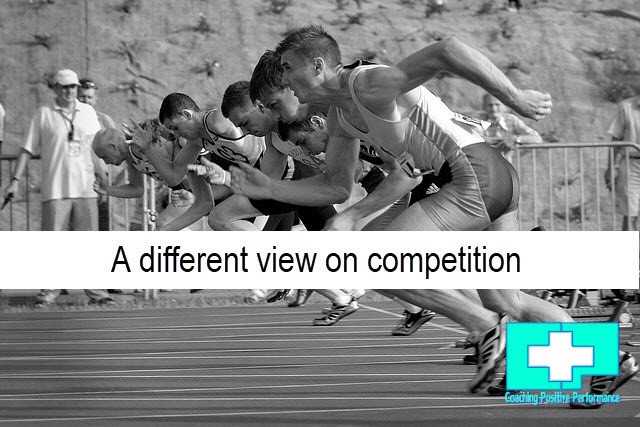 A different view on competition

​In today's tip, I discuss how your perspective on competition can make a big difference to your performance.

​You can listen to audio by clicking on the play button below. You can also read the transcription beneath the audio.

Competition seems to be everywhere in life.

Everybody wants to be the best at what they do.

In doing so, they compete against others.

This can foster a negative mindset where they want to see others fail so that they can succeed.

I don’t believe this type of competition is healthy or helpful.

Instead, I prefer to compete with others rather than against them.

They don’t always have to fail for me to succeed.

To hear an explanation of what I mean, click play on the audio below:

​Hi, Carthage Buckley here from Coaching Positive Performance. I have another quick tip for you today.

I want to talk to you about changing your perspective on competition. Traditionally, we think of ourselves as competing against others. Maybe you're in the workplace where your an employee. You'd like to get promoted to the next level and you can then think of everybody that's on the same level as you as competition because as you move up the organisation; there are less jobs, less opportunities. So, two doesn't go into one so, somebody has to lose out and, we tend to compete against those people because we want the opportunity.

If, like me, you're self-employed, you can think of anybody who's working in the same industry as you as competition. But it's not a healthy way to be thinking about competing against each other because when you're competing against each other you withhold information, you don't support each other, there's no sharing of knowledge. And that's a problem because you're not going to figure everything out for yourself. Your competition are not going to figure everything out for themselves. If there's no way of sharing knowledge, neither of you can progress to be all that you can be because you're not going to learn what they have learned; they're not going to learn what you have learned.

I would invite you to stop competing against others and start competing with them. There is still only one job for two of you to fit into and there's not always enough business for every company in an industry. That's true but when our competition are at their best it brings the best out of us. Because you know you need to raise your game to at least achieve the same level as them. So, when you do that you bring the best out of each other. You both improve; you both learn; you both gain from the experience. But it's not just the two of you who benefit. Your colleagues and your customers benefit too because when you get better at what you do, those whom you interact with; they benefit from your improvement and in fact they can end up improving too.

Think for a moment about the world of sport. I'll give you an example from tennis. Roger Federer, Rafal Nadal, Andrew Murray; they're three of the greatest tennis players of the most recent generation, but they all get on very well. They're actually quite friendly with each other. In fact, I was watching B.B.C. News from the UK recently and Andy Murray had a tournament going on in Scotland and Roger Federer flew in to be part of it. He flew in to help and support him even though they compete against each other regularly for titles. Because they've a good attitude with each other. They both know that when they are the best they can be they'll bring more out of the other person and when the other person reaches their best it brings the most out of them. That's what it means to compete with each other.

Sure, you can't share absolutely everything with your competition. There's plenty of stuff you can share. You can always be friendly and amicable. You can always find ways to work together and collaborate and that way you both improve. So, instead of looking at your competition as being an enemy; I would say you should always wish the best for your competition because when you do, you benefit as well so as I said, stop competing against others; start competing with them and reap the benefits of doing so.

​
How yoiu view competion is dependent on your values. You can discover your values with Values Based Living.

Healthy competition comes from having the right values.

You can discover your values with Values Based Living.