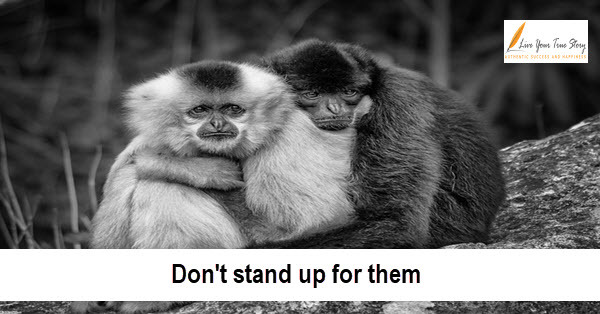 Don’t stand up for them – stand with them

​When I was younger, I found myself in some difficult situations where I was bullied and harassed.

As a result, I have had to learn to stand up for myself and; I have no fear in doing so.

I really grew to hate bullies to the point where I would stand up to them, even when I wasn’t the target of their behaviour.

Over the years, many of my friends and colleagues have come to see me as someone who is strong in the face of such behaviour.

They would come to me for help and support.

On one occasion, I was working abroad when a new manager arrived into the workplace.

She immediately began to bully some of my more vulnerable colleagues.

When they started to tell me their problems and, ask for my support, I decided that I would stand up for them.

I took the manager on and called her out on her behaviour.

I let her know that her behaviour was wrong, and I was not going to tolerate it.

I soon found myself in a disciplinary situation as management didn’t like my stance.

I understood this, and I had always known that taking stand against the bullying could have some drastic consequences for me.

When two of the people who had come to me for help were asked to give statements in my support; they said they couldn’t do it as they were too afraid.

I was annoyed at first but then I quickly realised my mistake.

I had led a cavalry charge without checking to see if I had a cavalry to join me in the charge.

I had stood up for people who were perfectly capable of standing up for themselves.

I should have told them that I would have stood shoulder to shoulder with them as they stood up to the bully, but I would not take one step ahead of them.

If they are not prepared to fight on their own, they are not going to fight when they have someone else to do the fighting for them.

So, set a clear boundary for the help you will give people when they are in trouble i.e. stand up with them; not for them.

If you struggle to set clear boundaries, this great resource will help you.

Do not be the path of least resistance

7 Situations where you need to set a boundary