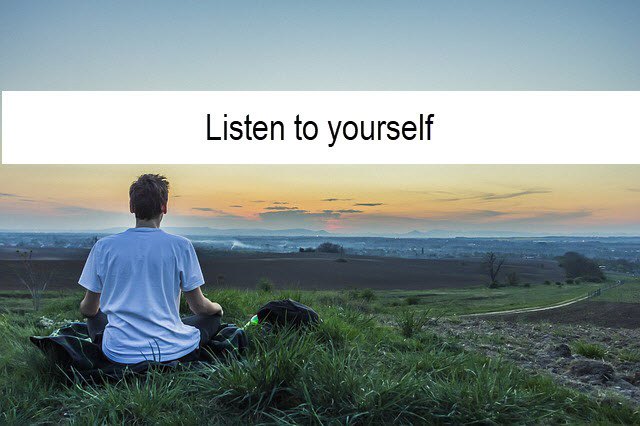 Listen to yourself and you’ll always be happy

Coaching requires the coach to spend a great deal of time listening the client. When appropriate, the coach will interject with a question. There are a number of reasons why the coach may choose to ask a particular question but quite often the question is saying one thing to the client – listen to yourself. It is important that the client does not just listen to the words they speak, but also to the way in which they say it and the feelings they experience when they say it. This is listening at a much deeper level than most people are used to. When you listen to yourself, you live your values and pursue your dreams. This is one of the most effective strategies for reducing stress and increasing personal happiness.

One day, a heart-warming message was posted on my Facebook page. My Australian friend, Marshall, had posted to tell me that he was enjoying his holiday in North America – the post was made from Vancouver. He wrote to thank me for encouraging him to take the plunge and follow his lifelong dream of visiting North America. It was clear from his message that Marshall was having the time of his life. I had previously spent a year in Australia, working with Marshall. During that time, he had told me many times of his desire to travel. I had offered lots of advice throughout the year but it could all be summed up with one phrase – listen to yourself.

While it is always nice to receive appreciation; I am afraid Marshall’s appreciation is largely unwarranted. For it was not me who inspired him, it was his own dreams. Marshall and I had often talked with our friends about travelling and about our experiences. Marshall was always keen to encourage us to fulfil our dreams. As the year moved on, I noticed a slight change in him. He began to talk more about the places he wanted to see and the things he wanted to do. It became clear to me that he had begun to listen to the advice that he was offering to others.

Marshall’s message reminded me of how I came to be in Australia in the first place. I had been working in Ireland when a colleague asked me for advice. He told me that his girlfriend had bought him a holiday to Egypt for his birthday. It was the one place that he had always wanted to go to. His concern was that he would have to give up his job – it was a summer job. We talked for a short while and he realised that he had to take the opportunity to go to Egypt. He thanked me for the advice and immediately handed in his notice. As he thanked me, my inner voice was screaming

listen to yourself. I had always wanted to go to New Zealand and Australia. I decided there and then that I needed to follow my own advice. 4 months later I had saved €4,000, acquired the necessary visas and was boarding a plane at Dublin airport. I was about to enjoy the best 2 years of my life.

When you listen to yourself it is easier to discover your purpose and live your values.

We all like to offer advice to our friends but sometimes, when we are offering that advice from the depths of our heart, we are not just speaking to our friends, we are also speaking to ourselves. So, take the time to listen to yourself; it may be the wisest advice you ever receive.

Is it ok to be selfish?

How to stop taking things personally

The secret of becoming mentally strong – Develop your mental strength

What it means to love yourself