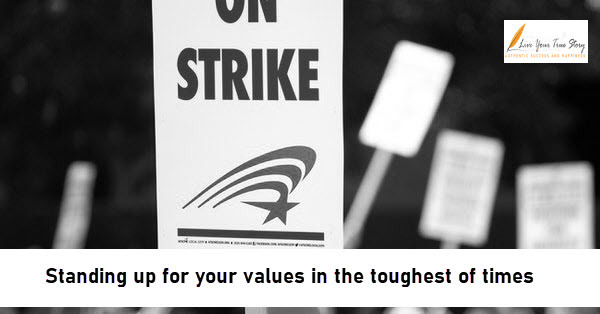 Standing up for your values in the toughest of times

When I was a young boy, growing up in rural Ireland, we were always told about our Uncle Garrett.

Uncle Garrett was my mother’s oldest brother who lived in Australia.

He was 19 years older than my mother and had left Ireland when he was 17.

My mother was 28 before she met him for the first time.

This all made Garrett a sort of mythical character, and I am delighted to say that he lived up to that status; right up until he passed away in 2009.

Garrett lived a fascinating life and I was blessed to hear so many fascinating stories about him.

My favourite story was one where he showed his great character.

Times were tough when Garrett arrived in Australia and good jobs were not easy to come by.

After several years, he was lucky to get a job in the sorting office of the Post Office, in Brisbane.

Things certainly looked to be rosy and looking up.

However, before Garrett’s position with the Post Office became permanent, an industrial dispute arose.

His colleagues, who were all permanent employees and thus protected by the union, went out on strike.

Garrett was left with a very difficult decision. Would he:

A.    Join his colleagues on strike which would likely lead to his dismissal? or
B.    Protect his employment and leave the strike to those whose jobs were protected?

He knew that any victory that was achieved may not benefit him as the company could seek to take their frustrations out on him and dismiss him from his position.

Despite this, he always held firmly to the belief that ‘an injury to one was an injury to all’.

It can’t have been an easy decision for a young man with a young family, thousands of miles from his homeland.

However, with little hesitation, Garrett examined his conscience, considered his values, and marched out to join his colleagues on strike.

The strike proved to be successful and the demands of the workers were met.

Surprisingly for the time, the company chose not to take any action against Garrett.

He eventually got out of the sorting office and became a Postman in his local suburb of Mitchelton.

In line with his convictions, he became a Union Rep within the company as he had earned the trust of his colleagues by taking a brave stance.

To Garrett however, it never seemed that brave.

He was just being true to who he was, and true to his core values.

Are you clear on what your values are?

How far would you go to stand for what you truly believe in?

Stay calm, composed and in control when under pressure when you have a clearly defined set of values.. Make difficult decisions easy when you are on what you believe.

Discover, define and priortise your values with  'Values Based Living.'.