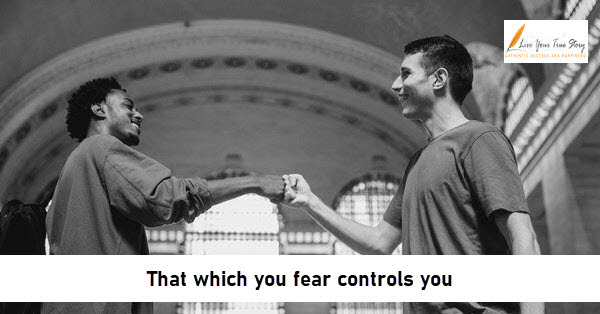 That which you fear controls you

There is an old saying in life that ‘he who angers you controls you’.

It is a true statement which we can all see the sense in.

We modify our behaviour to react to the person who angers us.

The same is true for fear.

That which you fear controls you.

People will do anything to avoid having to deal with what they fear.

For this reason, one of the most dangerous fears in the world today is the fear that others won’t approve of us.

As humans, we have a natural need to feel that we belong; that we fit in.

And most people will do anything to fit into the group(s) they wish to be part of.

An extreme example of that which you fear controls you

One of the most extreme examples of this is the rise of the cosmetic surgery industry over the past 50 years.

Many people are undergoing unnecessary medical procedures to look a certain way because they believe that will allow them to fit into their desired group.

They believe that it will get them the approval they need.

This example seems quite obvious but the fact is most people live their lives trying to conform to the expectations (real or imagined) of other people.

So much so that I believe all cemeteries should have a sign at the entrance stating something like:

‘You are entering the final resting place of our locals. 99% of whom never attempted to live the life they were given.’

It is not that you need to ignore others but when you make a decision about your life, it should be based on what you believe is right; not what you think others want/expect from you.

A common example of that which you fear controls you

I was recently chatting with my friend Kieran about this very subject.

We discussed how we had worked for the same company and had both suffered from making sacrifices to try to please management.

Both Kieran and I had agreed to do overtime many times where we really didn’t want to, and we had regularly done jobs which were not ours to do.

We had both been through difficult times and wanted to do well in the job.

So, we had sacrificed our own wishes to please others.

What happened was that what we saw as kind deeds soon became expected of us.

When we did our actual jobs, we were spoken to as if we were not being good employees because we were not doing all the extras.

At the same time, there were some employees who rarely ever helped or did anything extra.

On the rare occasion that they would do a little extra, they were treated as though the sun shone out of their backside.

It ended up that Kieran and I were treated terribly while those who rarely helped were looked after.

I got angry about it all and Kieran bottled it all up which had him feeling down.

Dealing with the reality

Having both gone through tough times, Kieran and I both feared that the job might not work out and we would be in a bad position again.

This fear drove us to meet expectations that didn’t really exist so, we sacrificed more and more.

In doing so, we created expectations that only applied to us and when we didn’t meet these expectations, we disappointed management, even though we were still doing our jobs.

Meanwhile, the expectation that applied to everyone else seemed to be that ‘what is seldom is wonderful’.

Because they rarely went the extra mile, the managers were more grateful when they did and rewarded them based on that sense of gratitude.

Ultimately, while nobody had the right to treat us badly, both Kieran and I accepted that we had walked ourselves into the situation.

The lesson from that which you fear controls you

The person who constantly gets plastic surgery will never be happy because the real problem is not their looks but their opinion of themselves which causes the fear that drives their behaviour.

The workers who consistently sacrifice to please the bosses will never be happy because the problem is their belief about themselves which causes the fear that drives their behaviour.

Instead, we all need to believe in our worthiness, learn who we are and what is important to us.

Then, we must base our decisions upon our wants and needs.

When we do that, we stop sacrificing and start living which helps us to experiecne our natural happiness.