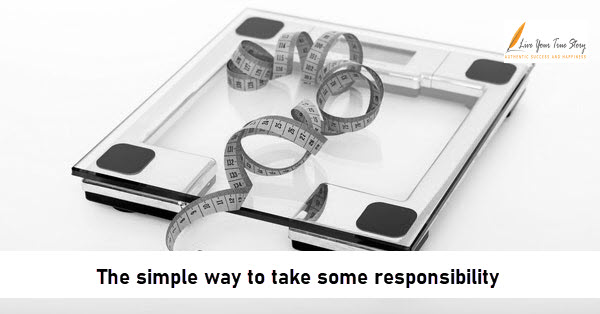 An old friend of mine used to be a personal trainer. People came to him with a wide variety of challenges, from powerlifting to gaining muscle mass. But by far the most common reason that he was employed was to lose weight. The first thing he would do with these clients was an assessment including fitness, weight, etc. Then he would instruct them to keep a food diary for the next week, where they would record everything they ate or drank. Of course, he would be adamant about the need to be honest and record everything. Why did he do this? The answer is quite simple – he was teaching them to take some responsibility for their life; starting with taking some responsibility for where they currently were.

Weeding out the non-serious

My friend valued his time so he would quickly eliminate those who were not serious about the challenge of losing weight. There was no point wasting his time or their money if they were not going to take the challenge seriously. How would he know they were not serious? Simple, he would take a look at the food diary. If the food diary did not resemble the eating and drinking habits of someone who was in their condition, he would know they were not being honest. You might think ‘Yeah, but they might have improved their diet because they were going to record everything’. If that were true, then it would show on the scales when he weighed them again. Simply put, if you improve your diet you will lose weight.

Interestingly, very few people did lie about their diet. Most were honest with their food diary and that was a clear sign that they were ready to take some responsibility for their weight loss. Those who did lie were told to either get serious or, get lost – though not in those strong words.

The next step that my friend would take with his weight-loss clients amazed me with its simplicity. He would review their food diary and pick one item to improve upon. It was often a drink. He realised that many overweight people drank unhealthy drinks and this was a simple area where quick improvement could be made. For example, many clients would drink 2 or more litres of Coca-Cola each day. That’s a lot of useless calories. My friend would ask them if they would be prepared to swap that for water; explaining how much of a benefit they would experience for their weight and their general health. Some people would agree but many would say that they couldn’t get themselves to drink water.

At this point, many personal trainers would be a little frustrated but my friend’s only goal here was to get them to take some responsibility which would result in some weight loss. That would then encourage them to take more responsibility to get more benefits. So, he would ask them instead if they would be prepared to switch to Diet Coke instead of Coca-Cola. The clients almost always agreed. That would be their one change for the week. When they were weighed again the next week, they would inevitably have lost weight. This would give them a confidence boost.

Taking it a little further

After the success of the drink swap, my friend would then identify another change that could be made, usually one that was a little more difficult. As trust was now being built, there would be less resistance from the client. Because they had seen the success they could have when they take some responsibility, they would be willing to take a little more responsibility. Again, when they would return the following week, they would have lost even more weight. Their confidence grew some more.

Before you can achieve great goals and change, you must set effective goals which challenge and inspire you to take the consistent action.

It is not just about weight

I would like to think that you understand that this story is not just about losing weight. It is about getting the best from yourself and taking responsibility both for the life you have created and for creating the life you want. There are people out there who would tell you that life is easy and you can simply wish your dream life into existence but they are talking through their backside. Life can be a real struggle but the best way to make the most of it is to get up and grab it by the horns. If you are stuck in a rut, identify some small thing you can do to make it better and do it. It does not matter how small it is. Just get started and get some momentum going. Do it each day and you will find yourself moving from some small, apparently trivial tasks to big change-making projects. For most of my life, I sat on my backside waiting for life to get better but I can honestly say that the only times where life got better were when I decided to take some responsibility and take some positive action.

So, identify those little actions you can start with and get cracking.

9 Unwritten rules for life which reduce stress and boost performance

The goal is never the goal