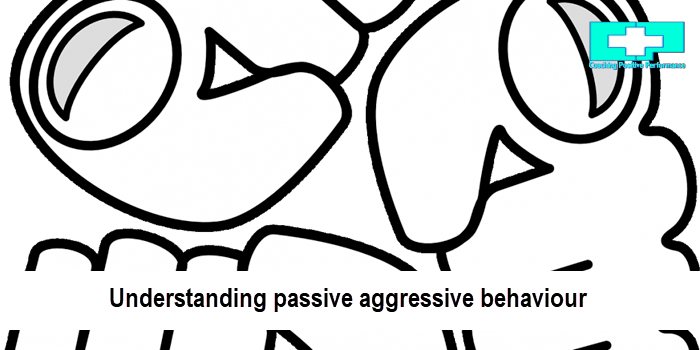 Passive aggressive behaviour has various traits and many ways of disguising the way a person with this behavioural problem truly feels at any given moment. This type of behaviour is reactive and is identified by non-verbal aggressive actions or reactions. Anger and frustration is bottled up instead of being discussed in a proactive manner and the outlet is often negative, with an indirect method of communicating with others about the way you may be feeling. Let me put that in simpler language for you – there will usually be a giant mismatch between what the person says and, what their body language or tone of voice communicates.

​A passive aggressive person can display their issues in many different ways. Below are some signs to look out for:

However, if you find that you can identify with the above and that these characteristics are frequent, then you would be wise to start monitoring your behaviour and identify positive changes that you can make.

This is often due to the fact that they do not want to raise their objections or discontent. They do not want to rock the boat and upset others. Rather than raise their issues and attempt to resolve them, they will instead hide their true feelings and hope that everything sorts itself out. In reality, things rarely sort themselves out and their anger and frustration builds until eventually they snap. Of course, when they do snap, it is not always with the person who upset them which makes matters worse.

​Criticism is another method used to mask any feelings of vulnerability that a passive aggressive might have in order to hide their true feelings. This is a form of reverse psychology which allows them to use more manipulation. This criticism is often labelled as feedback but it is nothing of the sort. Feedback, when delivered properly, is objective and impersonal. The focus is on the behaviour rather than the person. When the passive aggressive person criticises, they make it personal in an attempt to manipulate the emotions of the other person, in order to get a desired response.

It is important to remember that the passive aggressive person is not a bad person. They are employing a learned behaviour in order to make the most of their situation. Often, they do not realise the problems that this behaviour causes for others. In reality, they are usually experiencing a great deal of emotional activity which they have not learned to manage effectively. This can lead to a lack of emotional availability, self-loathing and other destructive patterns. Hence, why they feel the need to off-load onto another as the frustration builds up to a point where it becomes too much to bear and so, needs an outlet.​

​Awareness is critical to overcoming the communication and relationship problems posed by Passive Aggressive Behaviour.

​Passive aggressive behaviour becomes a habit if not tackled soon enough. When it does become a habit, the behaviour tends to reinforce itself i.e. they get their own way, thus seeing it as an effective tactic. However, this can lead to a person falling into the hole of despair and depression, as well as imposing their problems onto to their family, friends and loved ones. Should you suspect anyone in your family or social circles of being passive aggressive; it is important that you take action, as soon as possible, to tackle the issue. With patience and effort, passive aggressive behaviour can be overcome.

Understanding and managing your emotional triggers

Most Popular
Recent
Decision-making fatigue – the problem of too much choice 0 comments
Why are you receiving the silent treatment? 0 comments
Are you being aggressive? 12 signs of aggression you need to recognise 0 comments
13 Simple strategies for building trust 0 comments
What did you communicate? It probably wasn’t what you think 0 comments
Decision-making fatigue – the problem of too much choice April 20, 2021
Ask smart questions to solve your problems April 1, 2021
The danger of the victim mentality March 29, 2021
Take time to relax and achieve more March 29, 2021
7 Personal development questions you must ask yourself March 26, 2021