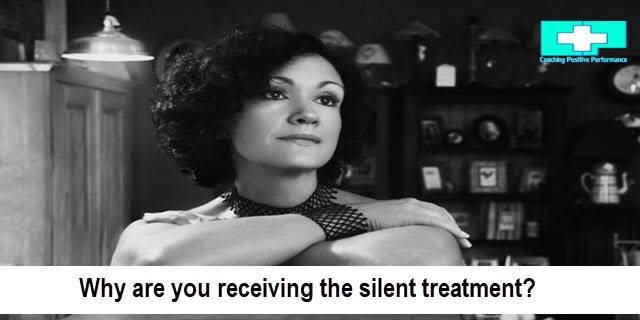 Why are you receiving the silent treatment?

The old song says that ‘Silence is Golden’ but I can only assume that the person who wrote the song never had to deal with somebody who used the silent treatment as a weapon of choice. Through my coaching, I have been approached by many people with relationship issues. You may not be surprised to learn that one of the most common problems is the dreaded silent treatment. Relationships can be difficult enough without having to deal with problems that you don’t know exist or; people who would rather play silly games than have an open and honest discussion about any problems which arise.

The silent treatment is one of the most common forms of Passive Aggressive Behaviour.

7 Common reasons for the silent treatment

1. Desire to manipulate and control

There is a natural desire to belong within each person. We want to be loved and to be accepted. One of the ways that people demonstrate that they accept us is by taking the time to have a conversation with us. If they choose not to talk, we may take it personal and our sense of self-worth suffers as a consequence.

When somebody gives you the silent treatment, they may well be saying that you are not worthy unless you think, act and behave exactly as they want you to. They are determined to have their way and they are determined to withhold their approval (i.e. via conversation) until you come around to their way of thinking.

Somebody can only control you if you allow them to so; be careful about giving in to such whims.

Easily and effortlessly overcome Passive Aggressive Behaviour with proven and tested strategies, so that you can build better, more valuable and longer-lasting relationships

With physical pain, you can usually get over it very quickly. For example, if someone were to punch you, the bruises can heal and the pain quickly subsides. As cruel as physical punishment is; emotional pain hits you at an even deeper level. It is essentially an attack on the very essence of who you are.

When someone chooses not to talk to you and withholds their approval, they are telling you that you are not good enough as you are. Although you may have done nothing wrong, your natural inclination is to wonder what you did wrong. If the silent treatment is continuous and prolonged, you begin to wonder what is wrong with you. After all the desire to talk to others is natural so, for somebody to not want to talk to you, there must be something seriously wrong with you.

When someone is giving you the silent treatment to inflict emotional pain, that is what they are trying to achieve – they want you to doubt and hate yourself.

If somebody is genuinely trying to inflict emotional pain upon you; you really need to ask yourself why you allow them in your life.

3. Feels they are not being taken seriously

Last year, I attended my friend Jamie’s wedding. In his speech, he mentioned how like all couples, he and his lovely wife Aoife had survived a few arguments. He intimated that he was especially proud of this as in some cases, he hadn’t even realised that they were arguing. Of course, Jamie was jesting but this can be a very serious issue in many cases.

The person who is giving the silent treatment often feels that their concerns are not being given the serious consideration that they deserve. They feel that the other person is ignoring them so, they decide to do some ignoring of their own in return. The problem with this is that we all live busy lives. We often say and do things without any serious thought or meaning. Maybe we don’t realise that our words or behaviour are offensive or, maybe the other person is interpreting it incorrectly. Whichever is true, the silent treatment is not going to resolve the issue. Only communication can.

If you have discussed your issues with the other person openly and honestly and; you feel that they are not taking you seriously, the silent treatment is unlikely to see them change. You might be better off asking why they are in your life and doing something about that.

Silent treatment is really childish behaviour so using it in order to be taken seriously is ridiculous and you need to be careful that you don't encourage it.

4. Doesn’t know how to communicate

So, always show that you are willing to listen and receive feedback. Be prepared to act on feedback if it is accurate. You don’t have to accept everything that the other person says but the willingness to listen and consider their feelings communicates a level of respect which can help to take the relationship to the next level.

Communication is the tool you need to use to bring everything out into the open but you will still need to resolve the actual issue once it has been revealed.

Why are you receiving the silent treatment? 7 Potential reasons.

5. Afraid of their own temper

I have applied the silent treatment on too many occasions and this is the principle reason why. When I was younger, I had an explosive temper. I would erupt like a volcano though I was never violent. However, I was on the receiving end of violence from a relative and my biggest fear was that I would turn out like that. So, when I had a problem, I would try to bottle it up because I was afraid that if I started to let it out, I would lose control of my temper and potentially become violent.

This was never true. I was not one for resorting to violence and just because a family member resorted to violence didn’t mean that I was going to do likewise. We all make our own choices and that was never going to be my choice.

I always found that I had the best relationships with people who had the confidence and communication skills to sit down with me and get me talking. And I learned that when I spoke honestly with these people, we could sort most of the issues out. At worst, I felt that I had been listened to and respected.

If the person does have a violent temper then you should encourage them to seek professional help and you need to make your safetly the number one priority.

The thing with the silent treatment is that somebody who is remaining silent always looks like the victim. Think about it for a minute. If you know that person A is not talking to person B, you automatically think that person B must have done something bad for person A to stop talking to them. So, it is possible to be the aggressive one, using the silent treatment and still be seen as the victim. You get to have your cake and eat it because you get to be the bad guy while looking like the good guy.

This is partly because we live in fake world where everybody pretends to get along all the time. If someone complains, we think they are being aggressive where they are usually just being assertive e.g. why should you accept poor service in a restaurant when you are being charged for that service? He who disagrees is automatically wrong etc.

So, if speaking up makes you look like the bad guy, using silence as a weapon becomes a great choice. Nobody can say what you said was wrong because you didn’t say anything. Nobody can attack the reasons for your behaviour because you won’t tell anyone what those reasons are.

With people like this, it can help to shine a light on their behaviour in a calm manner by telling them that you know exactly what they are doing.

The silent treatment is one of the most common forms of Passive Aggressive Behaviour.

Another curse of the modern world is that people are desperate for attention all the time. They get to see how vacuous celebrities profit from attention (good or bad) and so, if they feel that you are not giving them enough attention; they will force you to give them attention by acting in a manner which leaves you wondering what’s wrong and what you need to do to resolve the situation. Be wary if somebody is giving you the silent treatment for this reason because if they think it works, they will keep doing it.

It may also be that they genuinely believe that you are not giving them attention. They hope that by ignoring you, you will realise that you have been ignoring them and change that behaviour i.e. they give you a taste of your own medicine. However, as they are unlikely to be a pharmacist, they have no idea how to choose the right medicine. A healthy dose of communication would be far more effective.

People who are desperate for attention often have other underlying issues so you need to be careful not to encourage them by constantly rewarding their childish behaviour.

Easily and effortlessly overcome Passive Aggressive Behaviour with proven and tested strategies, so that you can build better, more valuable and longer-lasting relationships

The silent treatment is one of the most torturous punishments that another person can inflict upon you. They use silence as their weapon of choice. By withholding their approval, they expect you to work out what is wrong and resolve the situation before they will resume talking to you. Of course, if you haven’t noticed the problem before you’re given the silent treatment; an overdose of silence is not going to make it any clearer. The silent treatment may be an unhealthy habit or It may be a deliberate, vicious, manipulative choice to inflict as much emotional pain as possible. Either way it needs to be dealt with swiftly because it is one of the most unhealthy and destructive forces in any relationship.